The Korg DDD-1 (that's Dynamic Digital Drums or some such nonsense) is another one of those dirty 12-bit drum machines that ooze filth from every orifice but could be seen to have been produced to compete with the Roland TR-707.The DDD1 is very similar to its smaller brother the DDD5 but has a lot more in the way of inputs and outputs plus the ability to sample new sounds with the addition of the optional sampling board upgrade. The sampling option is somewhat rare as it cost about as much as the DDD1 itself when it was first released! We have never seen a working sampling board but we are assured that they exist. Along with the Kawai R-100, the Cheetah MR16 and the Casio RZ-1 this machine comes from the last era of totally over-engineered drum machine monsters before the likes of the Alesis SR-16 and the Boss DR-550 made the drum machine sterile and painfully dull. 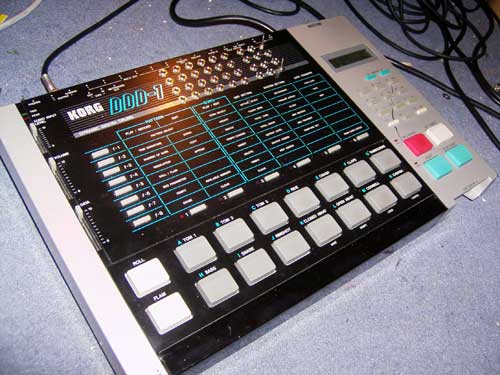 24 way main patchbay: More information and details of our patchbay mods can be found HERE. The DDD1 patchbay is rather keen on fat grinding distortion effects and ring modulated tones but also comes up with some strange random grooves through sounds getting spliced and re-sequenced together. Strangely, despite the fact that the DDD1 has virtually the same technology as the DDD5, the DDD1 seems to sound a lot harder and the circuit bent effects are more punchy. The patchbay shown can only be installed without the sampling board installed as the board fits in just behind the front panel where the patchbay is mounted. If y0u have a DDD1 with the sampling board and want to get it modded, get in touch and we'll see what we can do for you.

The patchbay mod is currently only suitable for machines without the optional sampling board installed.

Click on the demo's below for mp3's of what these mods can do. There is no external processing on these demos.

All drum machines of this era can be prone to a certain amount of background whine appearing when you pitch the sounds down too far, and the DDD1 is certainly no exception. Usually the whine is masked in use and it only starts to appear when the sounds are pitched so low they don't even have a passing acquaintance with being percussion sounds, but the DDD1 is a victim of this a little more than a lot of drum machines we've modded.

Listen to the demo below for an example of the effects available using the pitch knob:

MODIFICATION DEAL: Get all both mods at the same time and it costs £120. A saving of £5 on the normal price.

if you want your DDD1 modded get in touch using the CONTACT form.