The wobblevision is a wierd one (when have we ever made anything that isn't?), essentially a wobblevision is a modified TV that displays audio waveforms on the screen much like an audio phase scope or a hardware version of windows media player. We've built several of these machines and discovered that some of the best have been made from tiny 5.5 inch portable black & white TV sets. The added bonus of using these sets is that there is less chance of accidently dying when wiring them up (see below) 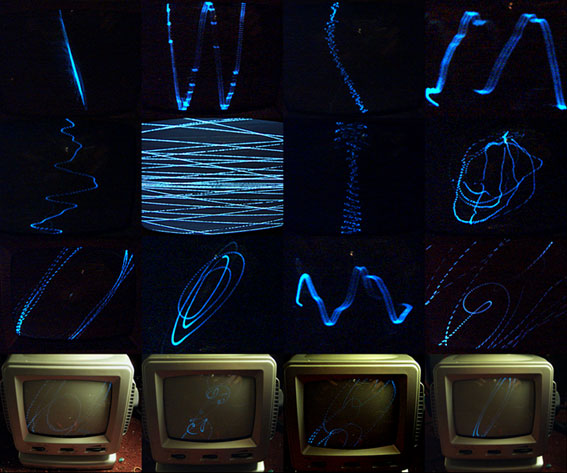 Sorry the bottom images aren't much good, its very difficult to photograph from a distance due to lighting problems.

The simplest wobblevision is created by connecting the speaker outputs of an amp to the to the CRT deflection yoke which controls the vertical and horizontal movement of the electron beam that produces the image on the screen.

With no input you just get a single dot in the centre of the screen but when you use a speaker output as an input the electron bean is deflected in relation to the audio signal to draw patterns on the screen. 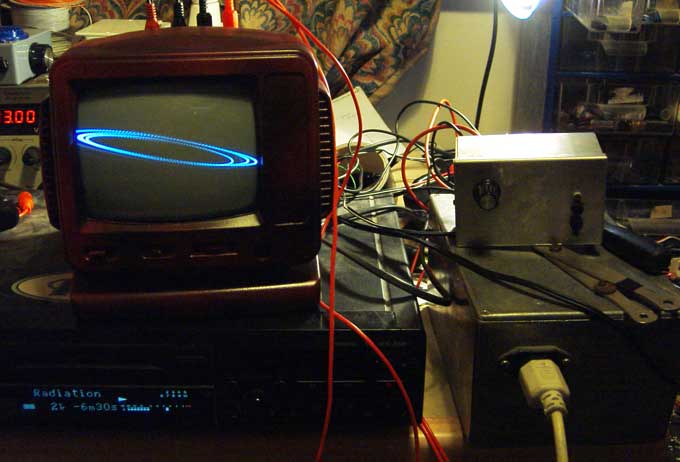 You can get several different types of pattern depending on how you connect the input to the deflection yoke. Connecting both postive and negative speaker outputs to the horizontal deflection + ground and the vertical deflection + ground will produce elliptical and complex 'spirograph' type patterns. Connecting only one speaker channel to the horizontal or vertical, and otherwise having normal connections to the yoke will cause either a vertical or horizontal wave display. Other type of display can be obtained by switching connections in different ways.

In order to get every combination we have used an 8 way phono patchbay type connection.

Be aware that this mod is EXTREMELY DANGEROUS! Even after a TV or monitor has been switched off for a while it can still hold enough voltage to kill you dead in a second, you won't get another chance. We really would not recommend you try this mod unless you are really confident that you know what you are doing. There is some information on the links below but we take no responsibility for anything....... ever.

Below is a demo of a wobblevision built from an old green screen monitor:

Here are some more wobblevisions we have built since first posting this page: 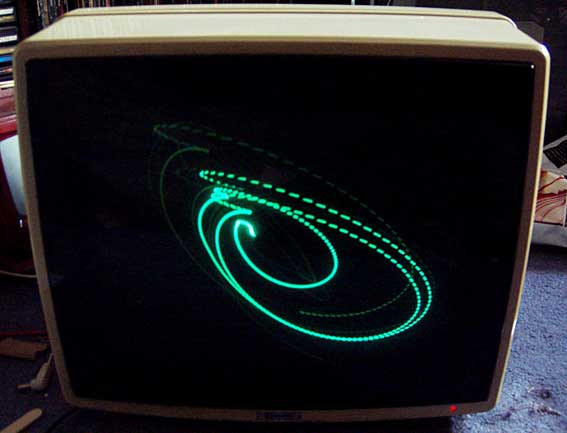 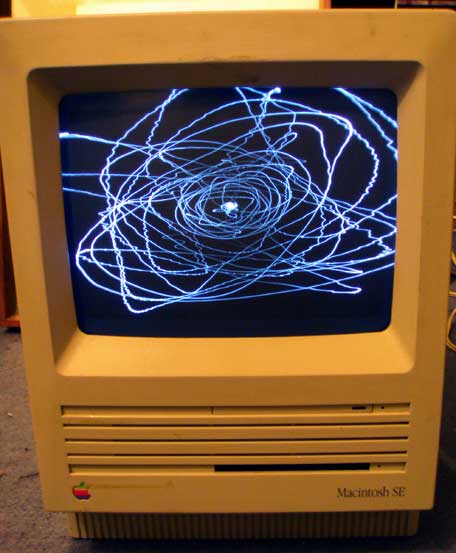 Heres another demo of a 'wobblemac' as shown above.