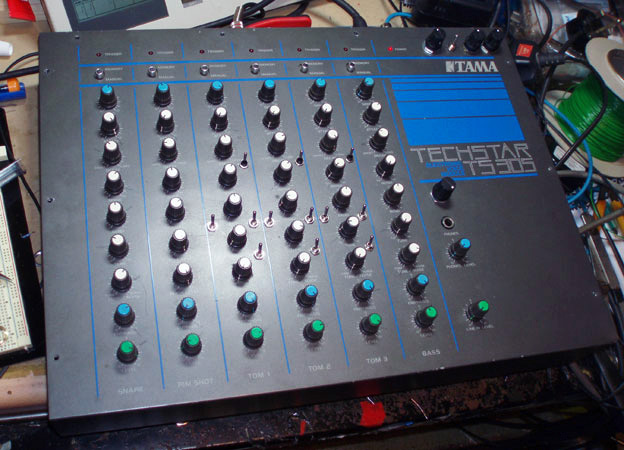 The TAMA Techstar TS305 is one of those curious analogue drum modules that were mainly designed to be used with the electronic drum pads of the era, but in this case there are also standard trigger inputs on each channel. The TS305 has 6 percussion channels. Each channel consists of a complete percussion synth with controls for Sensitivity, Attack (initial click), Decay, Noise (filter), Bend, Tune, Tone/Noise mix, Emphasis and Level. All the channels are identical apart from the 'Rimshot' channel which mysteriously features independent Tone and Noise knobs and loses the Noise filter. Although each of the standard 5 channels is identical in terms of synth circuitry, there are also a selection of trimmer pots on the board that are used to set the preset sound for each channel. At the top of each channel is memory/manual switch that allows you to adjust the settings in manual mode, but switches in the preset for the channel set by the trimmers in memory mode. Thus the channel labeled snare has a preset snare sound etc etc. Theres also an audio input round the back but more of that later. 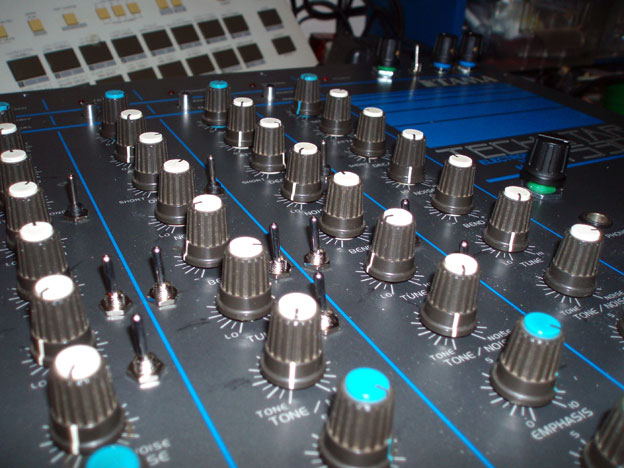 We have modded 3 of the six channels. These were originally labeled as Tom 1,2 and 3. On each of these channels we have added:

Decay extension switch - The original maximum decay is fairly short but switching this mod in adds a lot more decay length. With the mod activated the knob now starts at its minimum setting where it left off with the mod switched out, and then adds a couple of seconds of possible decay on top of that.

Lowest Pitch Extension - This is a permanent mod that extends the lowest pitch of the oscillators to subsonic frequencies.

High Pitch Switch - This extends the top range of the Tune control. Its on a switch rather than being permanently wired in as it tends to make the response curve of the tune control a little bizarre for everyday use.

LFO to Drum Tone Pitch Switch - This sends the LFO output to that channels pitch. See below for more details.

External Audio to Pitch Switch - This sends the external audio input to that channels pitch. See below. 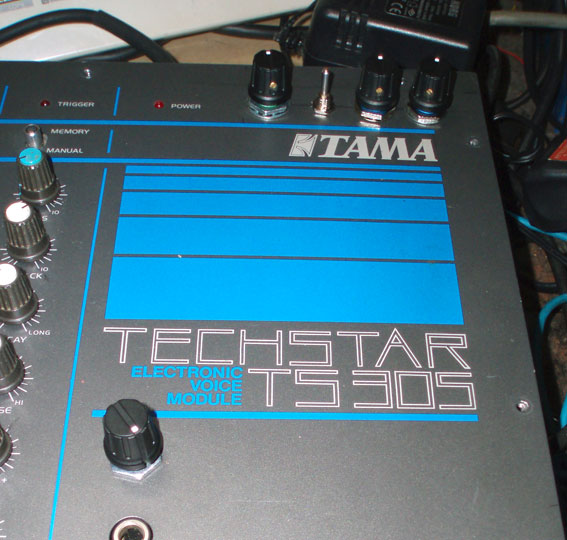 Along with the channel mods are an unnecessarily complex LFO with controls for speed, square/triangle switch, wave shape knob that sweeps from sawtooth, thru triangle to ramp in triangle LFO mode, and changes the pulsewidth in square mode, and finally an LFO depth knob.

There is also input level knob for the external audio input to drum pitch mod. Essentially this mod allows you to modulate the pitch of a channels oscillator tone at audio frequencies using an external audio input, for some clanging FM and ring modulation type sounds. Good results can also be obtained by routing the individual output of one drum channel back into the input of another channel, or even back into itself.

The original TECHSTAR TS305 article above was first written sometime around 2010, and despite dozens of people getting in touch, and us installing some more minor mods in other TS305's, we've never had the opportunity to really expand on what we'd done before. This is up until now, when someone wanted a similar mod, but we then got a bit carried away with it! This just goes to prove the old adage, send us something thats interesting to work on, and you get a lot more for you money! ;-) 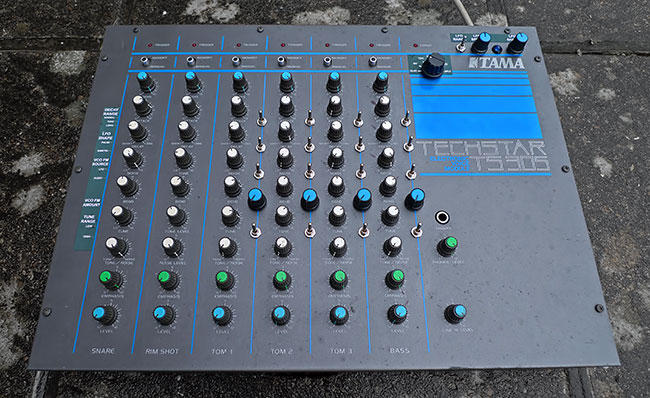 The new version of these mods is based on the previous version, but expands on version one to give more in depth control and a lot more possibilities for modulated analogue percussion weirdness. 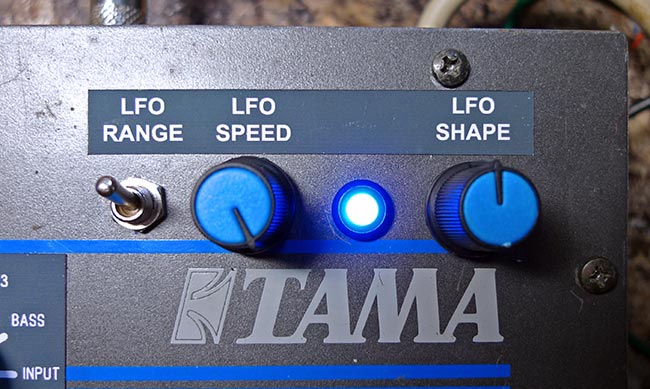 The LFO retains the same basic design, but also provides a new range switch that selects between the normal speed settings provided by the previous mods, and a super fast speed range that takes the LFO rate well into audio frequencies for all kind of insane 1950's sci-fi frequency modulation effects. The LFO still outputs pulse and saw/triangle waveforms, but on the new mods you get a separate LFO waveform selection switch on each modded channel, instead of a single overall waveform switch that is applied to all channels simultaneously. 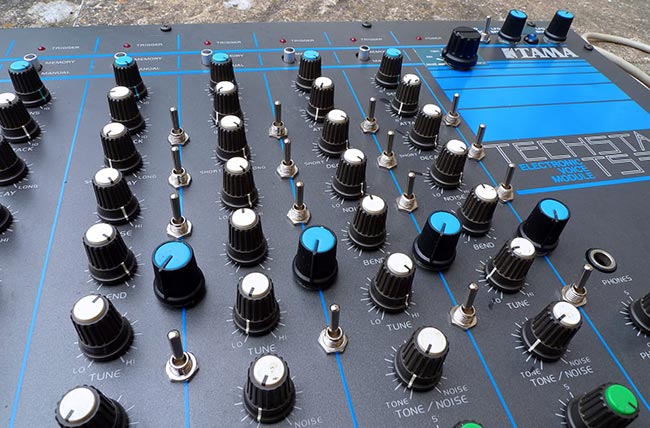 Decay range switch: As before, this sets the range of the decay knob, but it now has three positions instead of two. With the switch set upwards the decay knob range of the percussion tones is set to normal. With it switched downwards the range of the knob is extended to take over where the normal range left off at its lowest setting, and give a lot longer decay times at maximum. With the switch in its central position the channel will output a constant VCO tone with the pitch set by the channels tune knob. Any channel with its decay switch set to the tone position can either be kicked into life with a trigger input, or if its left to its own devices the tone volume will eventually rise on its own.

LFO Shape switch: As explained above, this switch selects the VCO LFO waveform independently for each channel. The choices are pulse or saw / triangle

VCO FM Source switch: The VCO frequency of each channel can be modulated either using the LFO, or with an audio source provided by the audio source rotary switch (see below). This switch selects between the two options. 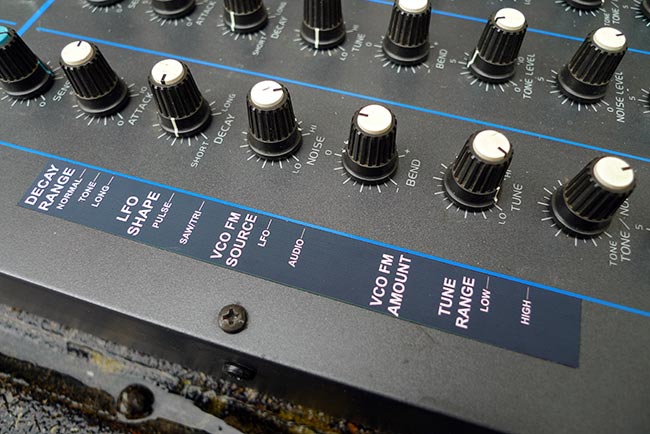 VCF FM Amount: This is a new knob on each channel that independently sets the amount of frequency modulation that is applied to that channels VCO. Anything from subtle vibrato or warbling Theremin like tones, to extreme cross modulation effects that wouldn't be out of place on the Forbidden Planet sound track, can be achieved using the VCO FM mod.

Tune Range switch: As before, this sets the range of the VCO tuning knob, but with some minor adjustments to give a better range and response curve than before. 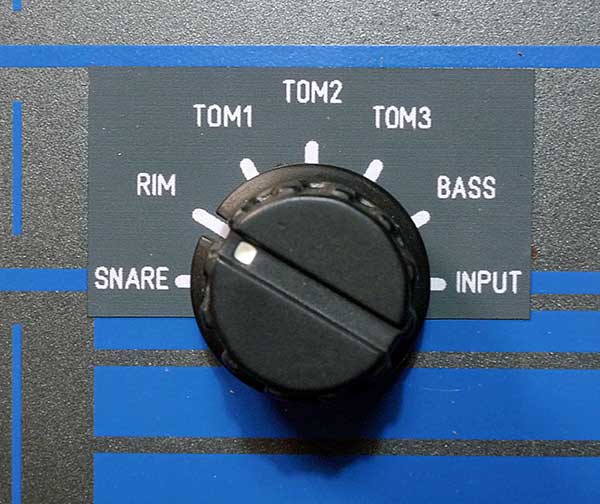 The new audio source rotary switch determines where the input for the audio setting of the channel VCO FM switches is sourced from. The audio modulation signal can be sourced from the output of any channel, or an external audio input. The output of a channel can be used to modulate its own VCO frequency for some bizarre frequency modulation feedback sounds.
The audio output of each channel is sourced before the channels output volume knob, so its entirely possible to do things like setting up one channel to output a constant VCO tone, then turn down the volume on that channel, but still use the that tone to modulate the VCO frequency of other channels. Alternatively you could produce an audible percussion sound on one channel and then use a muted sound on another channel to mutate the first channels sound on accented beats, kind of like you might use a side chain input on a compressor. Use the LFO to slightly modulate the muted sound and you've got an infinite variety of evolving hits and accents.

Some excellent examples of the kind of things you can do with this mod are shown in the YouTube video above. Here we have all four channels set to a constant tone and cross modulated with each other, and via the LFO.

This second video demonstrates some of the percussion sounds that this thing can produce using these mods.

This one has the v2 mods but they're installed on all six synth channels. 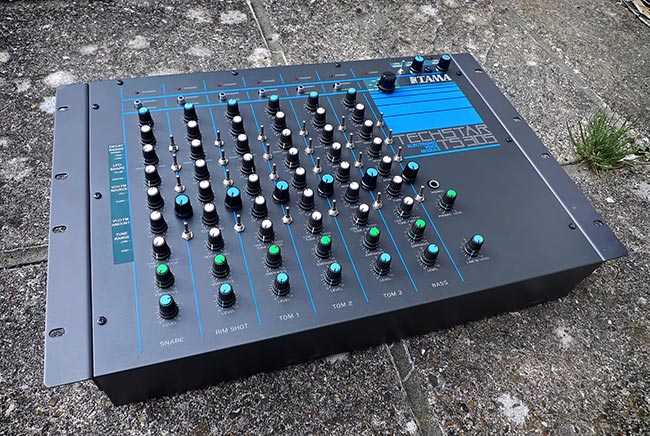 Extra mods on the synth channel include a Noise Filter knob and a Modulation Speed knob for the dedicated LFO found on that channel. The normal synth channel only has an LFO depth control.
The clap channel has a new knob and switch to control an extended clap noise filter, an extended decay range, and a knob to control the amount of envelope applied to the initial hit section of the clap sound. Theres already a knob to control the level of the reverb tail. 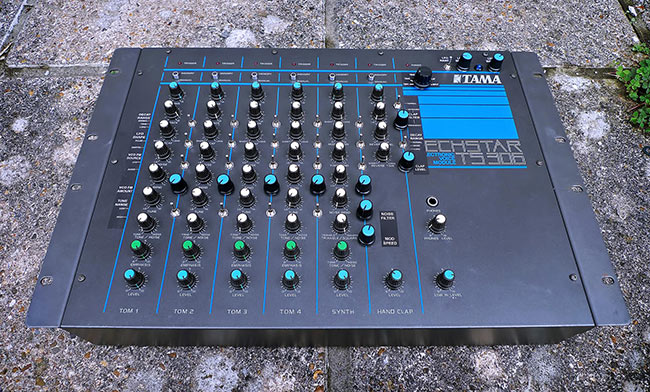