This beautiful thing is a 6 digit Nixie tube clock with a Dekatron spinner, all built into the casing from an extremely scary piece of 1930's medical equipment. The art deco styling on the case is completely original for the period it was made, as is the huge rectifier tube in the back...... and yes, it does have a socket labelled BIPOLAR COAGULATION on the right hand side!
Its only polite that we all just pause for a moment to imagine the potential here for a completely indecipherable death metal band logo.......... 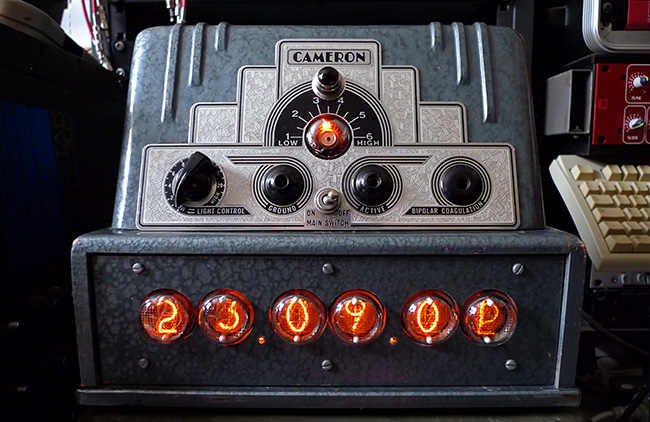 The casing was found on ebay in a somewhat battered state, with all the original accessories included in the wooden drawer that pulls out of the lower section. A bit of research on the makers, 'Cameron Surgical Speciality Company Chicago', suggests that between 1915 and 1953 they manufactured dental and surgical tools, including something called

"The Cameron Cauterodyne.  A bloodless surgical knife.  It was used for both cutting and coagulation during procedures, with independent controls to regulate each of those functions".

Judging from the controls, accessories and the massive transformer that was originally mounted inside, its probable that this thing was a base unit for the Cameron Cauterodyne. From the look of the interior when it was first opened up, it was fairly clear that its more modern function would have been as an entertainingly lethal fire hazard that would have probably involved picking rectifier tube shrapnel out of your face for weeks after you made the mistake of powering it up!

The information about the 'Cameron Surgical Speciality Company was found HERE, on the only page that seems to have any kind of mention of their history. The photo below is from the original ebay listing, showing the accessories included. 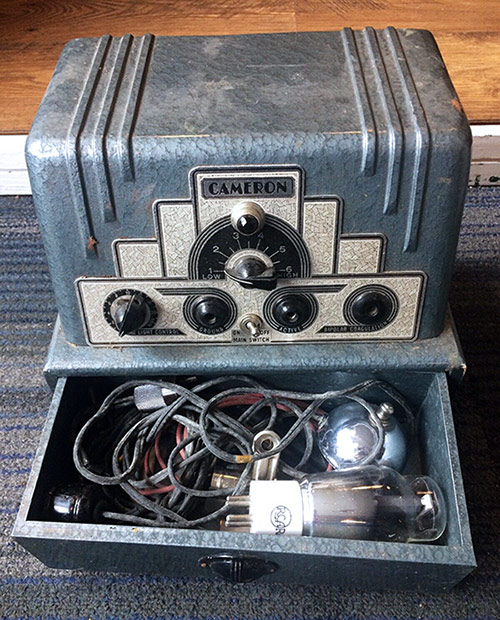 After removing the massive death trap of a transformer and other associated junk from inside, six IN-4 nixie tube sized holes were cut in the front of the removable accessories drawer. Inside the front panel of the drawer we mounted a HALO IN-4 nixie clock PCB from PV Electronics, who were also kind enough to update the firmware code to a custom version so that it would sync with their Dekaduo dual Dekatron tube driver board. 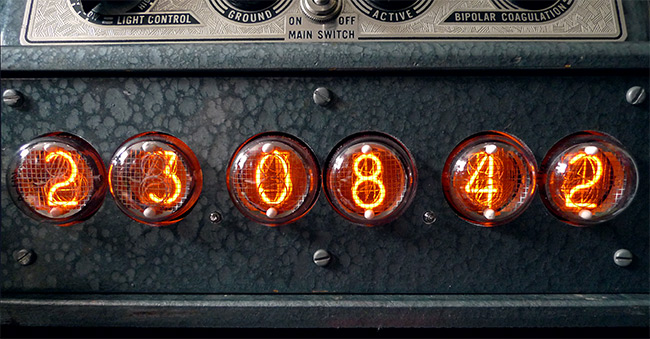 The IN-4 nixie tubes were bought from an excellent ebay seller in the Ukraine, who even included an extra spare tube for free. 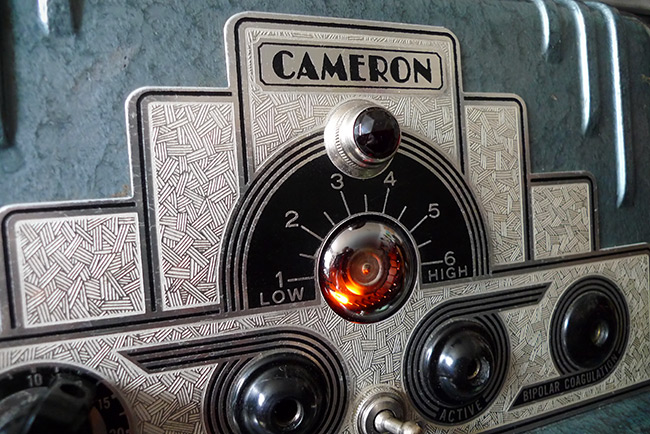 The original Bakelite chicken head knob in the middle of the panel was removed along with its weird mechanical linkage to some kind of variable coil arrangement, and the hole was enlarged so that a Dekatron counting tube could be mounted behind it in the centre of the panel.

The Dekatron has two display options controlled by the original ball headed "main switch" underneath it. The first mode has the Dekatron segments lighting in sequence so the illuminated segment spins around the tube once a second, and the second mode displays a pendulum effect with the segments spinning around clockwise for one second, and then anticlockwise for the next.

We've installed a new LED behind the red cut glass lamp cover above the Dekatron tube. The brightness of this LED is now controlled by the remaining chicken head knob labelled 'light control', for no other reason than because it was possible! The LED lights and flashes to indicate various clock functions. 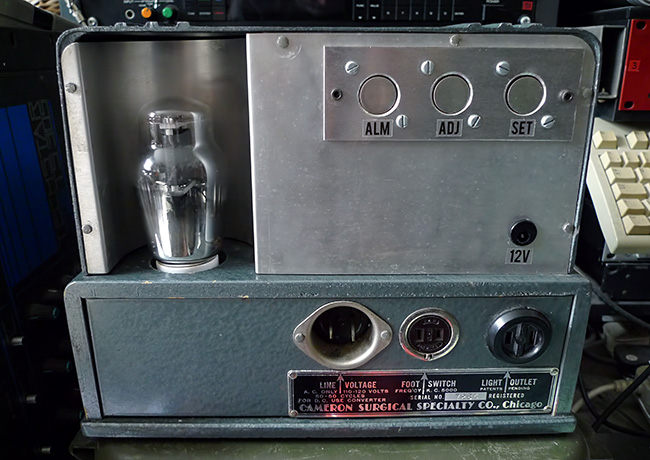 Round the back you can see the massive original rectifier tube which doesn't do anything anymore, but its certainly a beautiful thing. There are also the setup controls for the clock. These consist of three vandal proof tactile switches mounted on an aluminium plate. Originally the switches were going to be mounted on the back panel metal itself, but a combination of the thinness of the panel and a near disastrous 'drilling a hole in completely the wrong place' event, meant that mounting the buttons on a new panel seemed like a better idea. Theres also a new DC power socket for a standard 12v power supply. 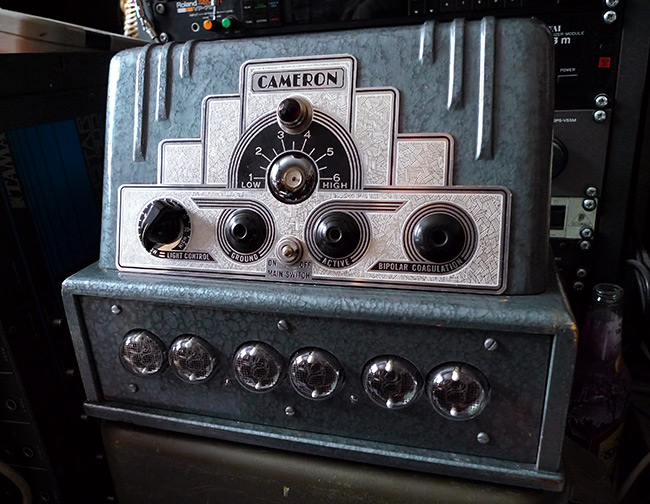 Below you can see a short video of this clock actually running.
From now on we're putting Dekatron spinners in absolutely everything regardless of whether its even slightly appropriate!