The Nanoverb 2 was first produced in 2011 and is more or less a direct hardware update to the original version from the mid 90's. The effects are far cleaner and more precise than on the original unit, but whether that means they are better or not depends on your personal preference.

It seems curiously difficult to find out the full details for this thing as Alesis seem extremely keen to mention its 52 bit DSP at every opportunity, but strangely reluctant to admit to the specs of its converters. The extremely careful way that Alesis have worded their promotional material makes you wonder exactly what the phrase "52 bit processing" actually means. You get the impression that Alesis are quoting 'bits' in the same way as a Chinese bluetooth speaker specs might use 'watts', i.e. with an extremely liberal definition! 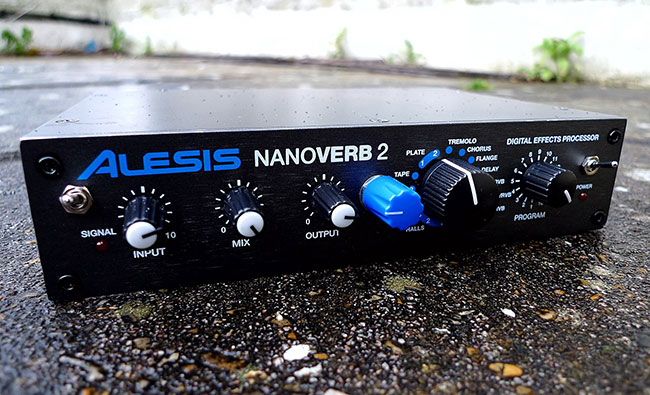 The mods consist of a power switch (Praise the Lord!), a LTC1799 based reclocking knob that controls the speed of the whole system, and a switch that does something very weird, but we're not 100% sure what it is!

The reclocking knob controls the effects processing clock speed and the sample rate of the analogue to digital converters. This means it will extend the reverb and delay times to a degree way outside of what would normally be possible, in the same way as changing the pitch of a sample slows down and speeds up its playback speed. Reverbs can be altered from short metallic ambiances to massive washes of sound, and delay times are now extendable to very noisy and LoFi extremes. Presumably due to the supposed 52 bit processing, the Nanoverb 2 is still fairly clean even when its clocked down to very low speeds. You don't tend to get quite the same aliasing noise and muffled sample rate reduction that you often hear on similar units when you slow down the processing rate, but you do get a small amount of background hiss appearing at the slowest clock speeds.
A small dot has been added to the front panel to show where the reclocking knob is set to the standard operating speed.

What the switch appears to do is to grab whatever audio data happens to be occupying the RAM at that moment and loop it round, but in the maddest way you can imagine. It sounds as if the Nanoverb 2 stores the sample data used for the effects in a completely non linear way, and the switch makes it read the memory back from beginning to end so you get random fragments of sound vomiting forth in what sounds like bizarre tribal rhythms. Its especially effective in stereo where you get a wide stereo field surging back and forth.
Its impossible to describe................ Just listen to the demo! ;-)

With the loop switch deactivated and the clock speed set to standard, the unit works like a normal Nanoverb 2.

Unlike the first version, this second version appears to be more or less just a box with a Wavefront AL3201BG Digital Reverb Engine chip set in it (definitely not 52 bit!). Due to the fact that the Wavefront chipset will only work within a very limited clock frequency range and has inaccesable on chip RAM, this second version cannot be modded.

THIS MOD WILL ONLY WORK ON THE FIRST INCARNATION OF THE NANOVERB 2 THAT HAS THE ROTARY AND TREMOLO EFFECTS.

There are two other versions of the Nanoverb 2 called the ALTO Alphaverb II and the ALTO TOPverb. These can both have the same mods installed, although the TOPverb doesn't really need a power switch. 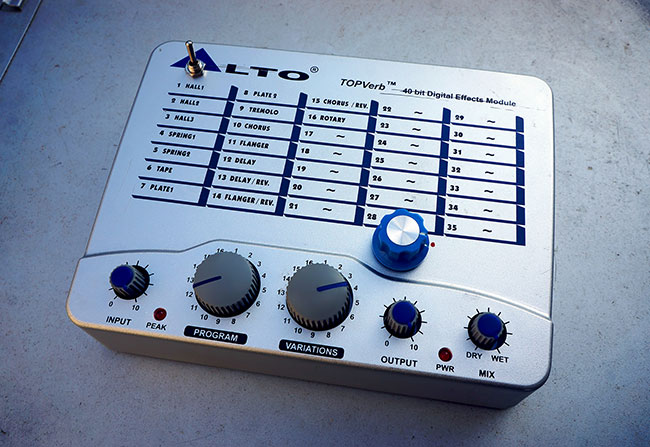 ALTO appear to be owned by Numark / inMusic, who also own Alesis, but god knows why some of their units are also released by Alesis. As far as we can tell the Alphaverb II, and the TOPverb were released about 5 years before the Nanoverb 2, so we're not sure which direction the rebadging is happening.

If you want to get your unit modded, get in touch via the CONTACT page.