YES INDEED ladies and gentlemen, here at long last are our mods for the mighty Roland SH101! We all know what a 101 is and what it does and if you don't know then you should be ashamed of yourself. We suggest a quick trip around Vintage Synth Explorer and we'll be asking questions later so stay alert. ;-) 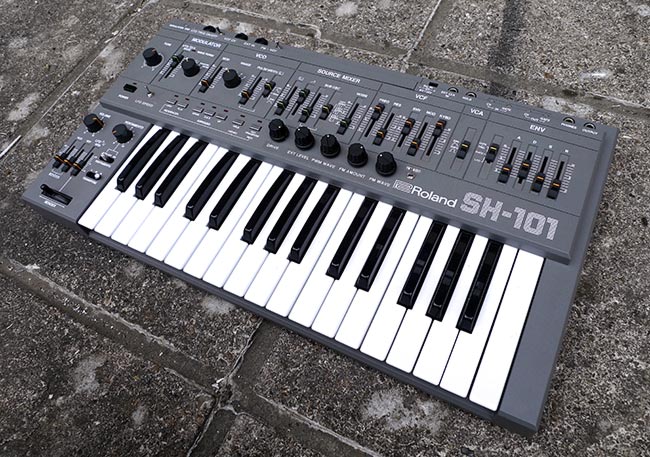 Filter Overdrive – This knob drives the VCO or external audio source into the filter stage causing the VCF to overdrive and distort. The knob is wired with the maximum drive as fully counter-clockwise and the clean sound filly clockwise. In this respect it could be called a Filter Cleaning control but it is wired this way to give the best response curve to the control. This control will boost the output of the 101 a huge amount so be careful.

PWM waveform source – Normally with the PWM set to LFO modulation you only have the option of using the triangle waveform as a modulation source. This rotary switch allows you to set the PWM modulation source to other waveforms independently of the main LFO setting. The options are Triangle, Square, Random, Noise, Sub-1 and Sub-2. The Sub waveforms are actually sourced from the VCO. Changing the setting of the sub octave switch will alter the sound with these sources. 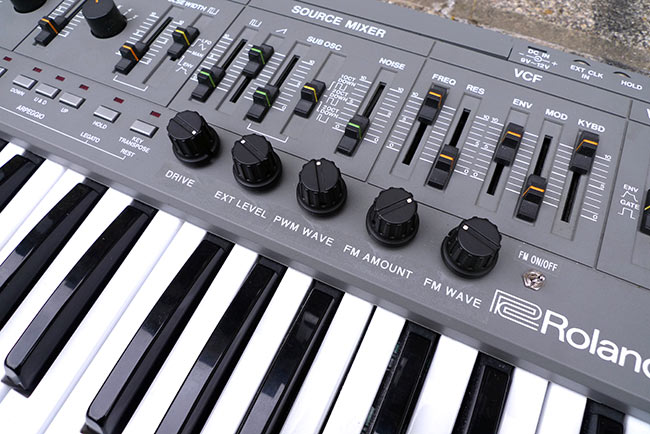 VCF CV input – This jack socket on the top left of the case will accept an external voltage to control the filter cutoff. The suggested input is 0-5V but it can probably take a couple more volts if your Midi-CV converter can deliver them.

Audio Input – This is the jack to the right of the VCF CV input. It will accept an external audio input from any source and can be routed through the filter or used as another VCF FM source.

Audio Input Level – Strangely this knob controls the level of the audio input. 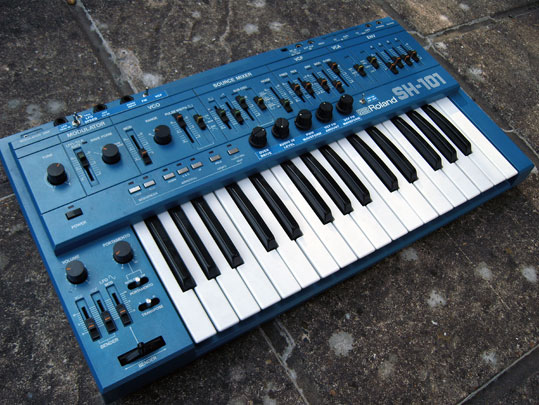 VCF FM controls – Essentially VCF FM allows you to modulate the filter cutoff at audio frequencies to create all kinds of clanging cross modulation and bizarre alien splatters and sweeps. This effect works best with the resonance turned up into self oscillation but also produces good effects with lower resonance settings. The VCF FM waveform control allows you to select one of six sources for the FM modulation source. The options are square (PWM still has an effect), sawtooth, sub-1, sub-2, sub-2 pulse and noise. You can also use the external audio input as a source. The VCF FM amount knob controls how much the filter cutoff is modulated by the source signal and the switch turns the effect on and off. The VCF FM is probably the most dramatic mod of the lot and while it can be somewhat unpredictable you can create sounds ranging from savagely aggressive grinding to unearthly ring modulation drones that wouldn’t sound out of place on the Forbidden Planet soundtrack. 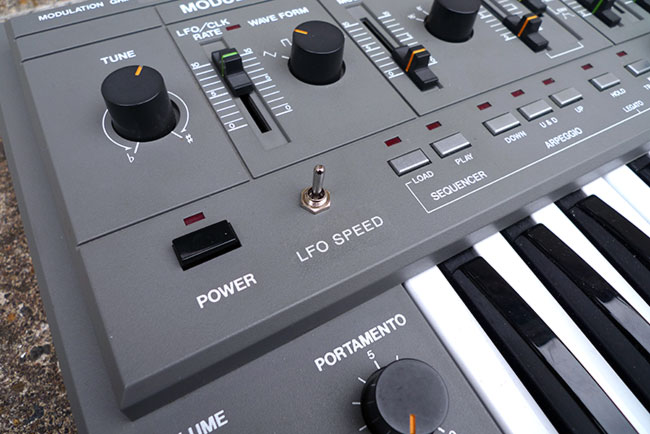 LFO rate extension switch – This is the three way switch on the top left of the case. The right hand setting delivers the normal range of LFO speeds. The centre setting allows much slower speeds ranging right down to 25 second sweeps at the lowest setting. The left hand switch position allows outrageously fast LFO speed, well up into audio frequencies peaking at around 550Hz. Some evil effects can be gained by cranking up the filter mod or VCO mod sliders and switching the LFO to its highest speed.

LFO trigger input – This allows you to inject a normal +5v trigger signal to this socket which will restart the LFO waveform from its peak point. The LFO will still run at the speed set by the slider but every time a trigger is received the waveform will restart. This runs independently of the clock and CV / Gate inputs allowing you to run a sequence via CV / Gate or the sequencer clocked externally and sync the start of the LFO sweep to a certain point instead of letting it run randomly. You can also restart the LFO anywhere you want in a sequence for special effects. One bonus feature of this mod is that it will also accept an external audio signal and retrigger the LFO at audio frequencies. Crank up the resonance, turn up the VCF mod slider, play a drum loop into the LFO trigger input and you can create sounds that will quite literally scare the shit out of you. 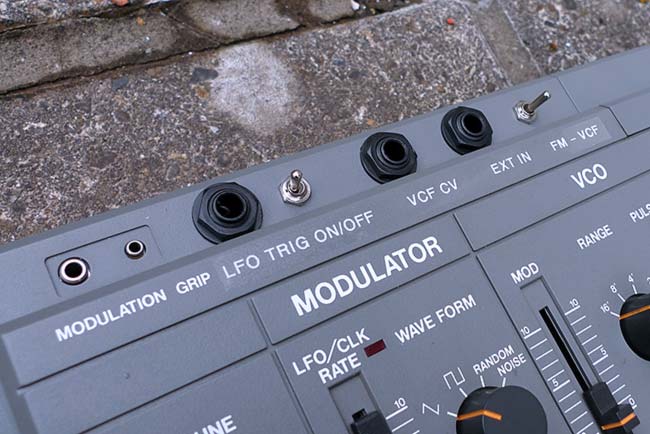 LFO trigger on / off switch – This switch to the right of the trigger input socket turns the effect of the LFO trigger on and off.

Before you start to panic, your SH101 will still function as normal with none of the new mods activated and the original sound is not affected in any way unless you want it to be.

You can hear some demos on the player below. For some reason they do seem to all demonstrate the more aggressive side of what the mods can do. Must have been having a bad day that day ;)

And yes, before anyone kindly points it out. We know our mods are similar to the Novamod SH101 modification that was available many years ago. This is probably because we used a copy of the novamods DIY guide to install mods on a 101 a few years back, with much difficulty as half the guide was completely wrong! 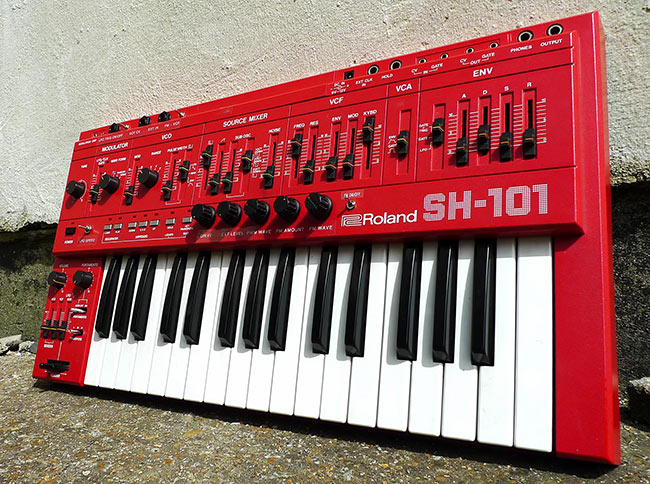 While the SH101 has very stable tuning in operation you will probably find that unless your 101 has been serviced recently the overall tuning has drifted somewhat and the tuning curve across the keys is not quite dead on. The most common symptom of this problem is notes playing further and further out of tune across octaves i.e. you can tune one C key to C, but the C on the next octave up will be slightly flat, and the next octave will be even further out. You may also find that the filter doesn't track the keyboard correctly and the resonance self oscillation isn't in tune across octaves. We can fix these problems by performing a full keyboard calibration and tuning using military grade power supplies and equipment.

The SH101 has inexcusably inadequate external power filtering and as a result you will often find that if you use a cheap supply to power it you'll get a nasty mains hum at the output that appears regardless of the output level setting. With batteries or with a more expensive regulated power supply you'll find that the background hum drops considerably, although it often seems like complete luck as to which power supplies will cause a hum and which won't. This simple mod adds a lot of extra power filtering which removes about 80-90%% of hum when using a bad supply and makes hum inaudible in every day use when using a better quality PSU.

If you want your SH101 modded get in touch using the CONTACT form.