The fact that the Akai S01 exists at all is fairly baffling as to all intents and purposes it was obsolete before it was even released. A 16 bit mono sampler with 1MB of memory as standard expandable to a massive 2MB maximum, sampling at a maximum bandwidth of 32khz, with no storage options other than a floppy drive, with only one output, with very few editing options and only a 3 figure numerical display to edit with. Even the curious addition of 2 MIDI inputs doesn't save it from being a rather confusing addition to the Akai range. EMU and Ensoniq must have been pissing themselves laughing when Akai released the S01 for £999 in 1993 (yes you did read that right - £999), but the S01 has the last laugh as our mods have taken its sound mangling possibilities way beyond any other rackmount sampler ever produced. In fact a bent S01 is far superior in circuit-bent terms to any other Akai sampler we have come across! 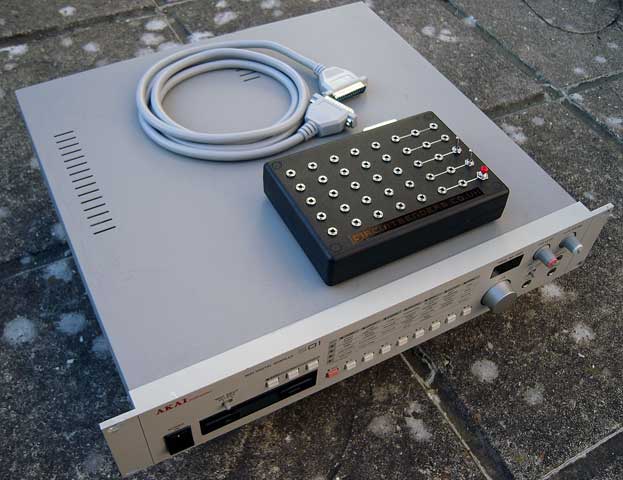 We have several options available for mods on this machine. The first is an external patchbay connected to the rear of the main unit by a 25 way D-sub cable. This patchbay comes in one of two options. For £99 the patchbay is mounted in a desktop case that can be as far away from the main rack as the cable you can find. A two metre cable is supplied. In this case the patchbay has 25 sockets in the main patching area. The connector on the Akai itself is mounted on the rear panel by default, but we can mount it on the front if you'd prefer (see below). The £99 desktop patchbay option is shown above.

For £120 the patchbay is mounted in a single unit rackmount casing which is joined to the main unit via a short 25 way D-sub cable and associated connectors mounted on the rear of the S01 and the patchbay. This option can be seen above. The increased cost is down to the extra cost of the rack case itself, and the mysterious fact that a shorter 25 way D-sub cable costs about 5 times as much as a two metre cable! With a rackmount patchbay the main patching area has 24 sockets, but it is the same as the desktop patchbay in every other detail.

With the external patchbay detached or no cables in the patchbay the S01 functions as it normally would.

More information and details of our patchbay mods can be found HERE. The S01 is very good at producing insane sample chopping effects where sections of your sound are sliced and rearranged as if they have been through some advanced beat chopping session in the hands of a crazed lunatic. 90% of the time your samples are not permanently affected when you remove any patchbay cables although if you sample another sound with patchbay connections already in place you often find that the new sound is spliced into the old sound in all kinds on unexpected ways.

The second modding option is similar to the patchbay in terms of bent effects, but it uses a bend bus switching matrix instead of patch sockets. You will possibly lose a certain amount of versatility when using switches instead of patchbay sockets, but you get the added bonus of a more tactile and immediate interface for live effects and drum fills. We would probably suggest a patchbay for a 'studio boffin' sound design approach, and a switch bank for a more 'hands on' live approach. Having said that, the external boxes are interchangeable on the end of the cable so if you wanted both just let us know and we could probably sort something out for you.

For £110 we can mount the bend bus switching matrix in a desktop case, as shown on the image below. The switch bank features 25 on/off switches that each connect to a single bend point associated with a certain sample mangling process. You need two or more switches activated simultaneously to have any effect. When two switches are activated at the same time the processes associated with those switches will combine to produce a new effect. Any number of switches can be activated at any time. 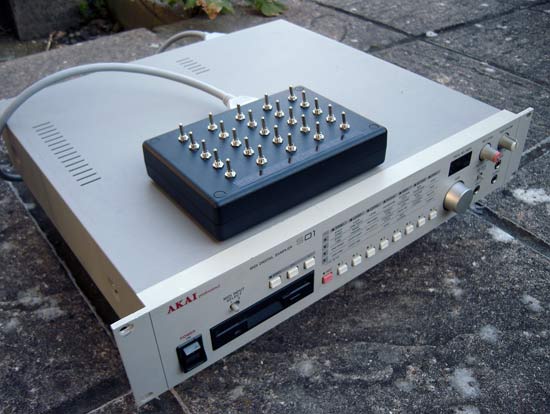 The cost is slightly higher than the patchbay in the same case due to the higher cost of the switches compared to the patchbay sockets.

We can also mount the switching matrix in an external single unit rack case as shown below. This option costs £130 and is identical to the desktop version in terms of operation and bent effects. 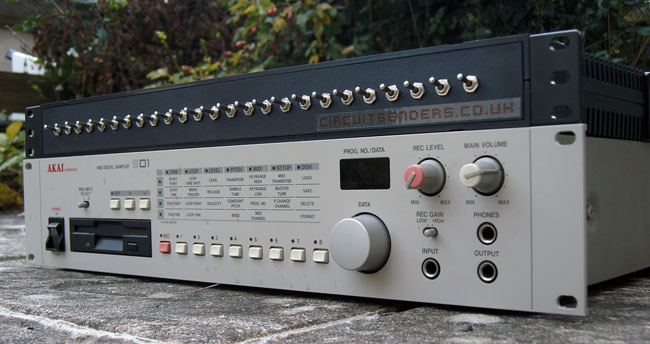 The prices for these mods are as follows:

Click on the demos buttons below to hear kind of sounds that these mods can produce. There is no external effects processing on these demos.

The first two demos are random sounds and loops. The third demo shows what happens when you have several sounds in memory at the same time. Here there are 8 sounds in memory which are played one after the other at the start. The sounds are then triggered from the front panel and processed with the patchbay causing them to be spliced and morphed together in all kinds of unlikely ways.

By default, the connector for the 25 way cable is mounted on the rear of the S01, above the midi sockets. This will work with both the rackmounted and the desktop control boxes, but in some situations such as when you can't take the cable for a desktop patchbay out of the back of an enclosed rack, it might be more convenient to have the connector on the front panel.
We can move the connector to the front panel, above the power switch and floppy drive for an extra £20. The £20 pays for the fact that Akai samplers are built like tanks, and cutting a rectangular hole through the 3mm steel of an Akai front panel is one of the least fun things we can imagine doing!

If you want your S01 modded get in touch using the CONTACT form.