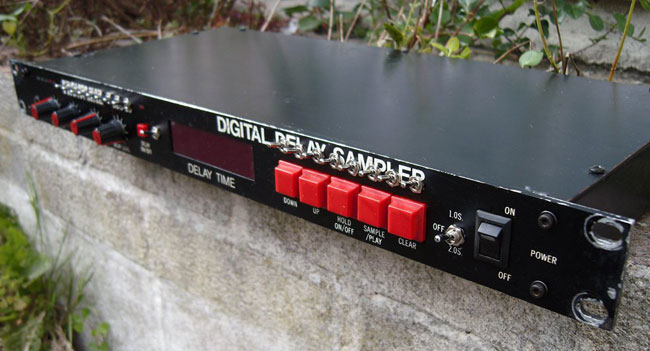 The 1.0s-OFF-2.0s switch on the right hand side of the panel selects between the time / bandwidth settings. Why there is an OFF setting we’re not entirely sure as you can turn the delay off with the red delay on/off button to the left of the display. We think it has something to do with the bizarre fact that if you switch too fast between the 1 second and 2 second settings, the maximum time doesn’t actually change. In order to change maximum time settings you have to switch it to OFF for about 2 seconds, which presumably gives it time for some internal caps to discharge and the screen to fade out, and then switch it to the other time setting. 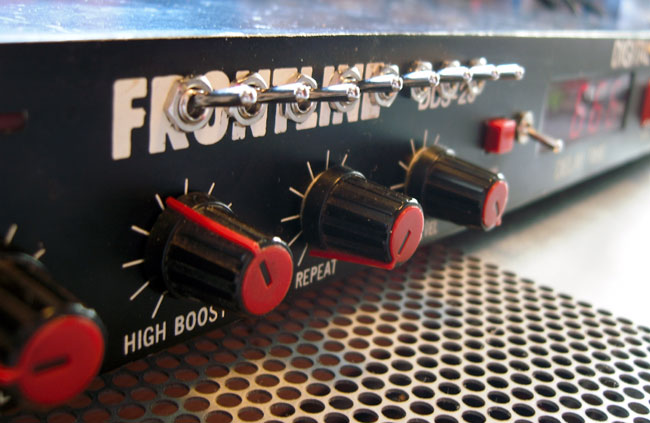 The repeat/feedback knob has been tweaked so that any setting of 3’o’clock or above will produce a rising delay sound with more than 100% feedback for some distorting dub delay action. 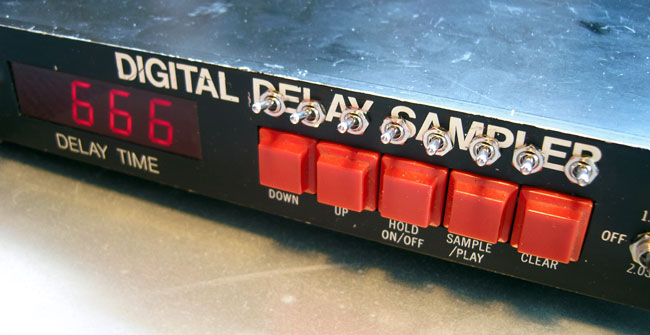 The delay grinding switches are the 16 switches along the top of the front panel. You need at least 2 switches activated in order for any effect to be heard. Each switch creates a certain effect and when it is combined with another switch the two effects will merge. As an example, one switch may create chopping effects while another creates bit crushing at a certain frequency. If you activate both these switches you’ll get chopped bit crushed delays. Add a third or fourth switch to the mix and things get very nasty very quickly.

Slightly different effects tend to be available depending on if you are in the 1 second or 2 second delay time modes. The switches can effect the delays in real-time, or be used to manipulate a loop created with the HOLD function.

You can often get some excellent results by overdriving the input and forcing the unit to act as a compressor. With a high delay feedback and an overdriven input you can get the unit to act as a kind of ducking delay where the input signal compresses the delay out of the mix, but as soon as the input signal disappears the delay rises again to fill the space. This is excellent on drum loops and percussion mixes.

Check out the demos below to hear what this thing can do. The first demo Is the result of overdriving the input with a drum machine. At around 1:21 in the unit is switched to 100% wet mix.
The second demo is mainly self generated sounds using the extended regeneration/feedback range. The third demo is some random guitar noodling with a clean guitar processed with the switches, and the final demo is a vocal looped with the sample and hold buttons, and then mangled with the mods.