These mods were the direct result of a search for a moddable machine that must have been sold in the hundreds of thousands of units, but now sits in a lot of peoples racks unused. Thats not to say there aren't some useful effects available on this unit, but these days many people will have replaced it with a computer, or just something better from the vast number of superb secondhand FX units selling for virtually nothing these days. As a result many Zoom units are now living in that twilight zone between not being good enough to be good, but not really being bad enough to be interesting.

Our mods add a reclocking knob, a 14 way RAM decimation switching matrix and most importantly, a power switch! Only someone who hasn't spent hours reaching around the back of racks, or trying to figure out exactly which power supply in the 4 way sockets is the one for the Zoom, would underestimate the usefulness of something as simple as a power switch!

The switching matrix allows you to apply what sounds like various kinds of comb filters, pseudo ring modulation, bit crushing, distortion, and what can only be described as audio smearing™. Each switch has a certain effect variation that is usually associated with it, such as a certain frequency of sample chopping or distortion intensity, although its effect can be altered depending on which other switches are activated simultaneously. You have to activate more than one switch at a time for any new effect to be applied, but when two or more switches are activated their associated effects will combine to produce something new. Usually the original signal is not effected, but the effect signal will be, i.e. in a delay setting the original dry signal will pass through the unit unscathed, but the actual delay signal will be mangled beyond recognition.
The only drawback of this unit is an annoying amount of cyclical noise on certain effects and switching settings, and the fact that it often nearly gives you a heart attack when things get out of control very quickly, but with a little experience these issues can be avoided, assuming you want to avoid them. 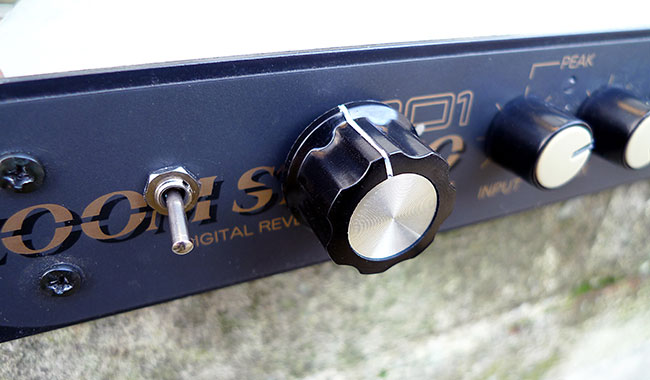 The reclocking knob sets the system clock speed of the RAM and the analogue to digital converters. This means it will extend the reverb and delay times to a degree way outside of what would normally be possible. Reverbs can be altered from short metallic ambiances to massive washes of disconnected sound just by turning the knob. Delay times are now extendable to a crunchy 15 seconds! The knob also changes the pitch shifting and ring modulation frequency, and appears to do very odd things to the vocoder and LoFi EFX.
As the reclocking knob also controls the clock rate of the converters, it also changes the sample rate of the incoming audio. At higher than normal clock settings the audio quality is actually better than the stock machine!
A small silver dot is added to mark the point around the knob where the unit is set to its normal system operation frequency

We would advise replacing the official Zoom power supply after these mods have been installed. Using the reclocking knob to run the unit at higher than normal frequencies means the unit will pull more current, and the nominal 300ma maximum supplied by the standard PSU is no longer sufficient. We would advise using a 9v PSU capable of delivering 500ma or more.

If you want your ZOOM 1201 modded get in touch using the CONTACT form.