Another Rocktek (and with a name like that you know we're talking quality) guitar effect pedal that has been mutated into an device of unbridled savagery to create sounds perfectly able to tear your head clean off its hinges at 50 paces. Something along those lines anyway :) 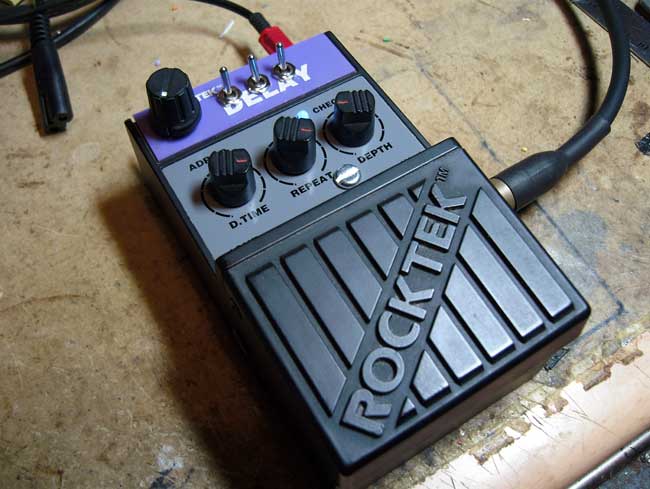 This pedal started out as a very dull analogue delay with simple Delay time, Repeats and Depth (level) controls. We have added an extra 6 switches, 2 body contacts, a knob and an entirely gratuitous blue LED that is only there because we drilled a hole in the wrong place so had to plug it with something :)

Splatter tone switch: err...... seems to create a kind of solid splattering tone delay that varies in frequency according to the audio coming into the pedal. Also causes the pedal to scream at different frequencies when other controls are engaged. 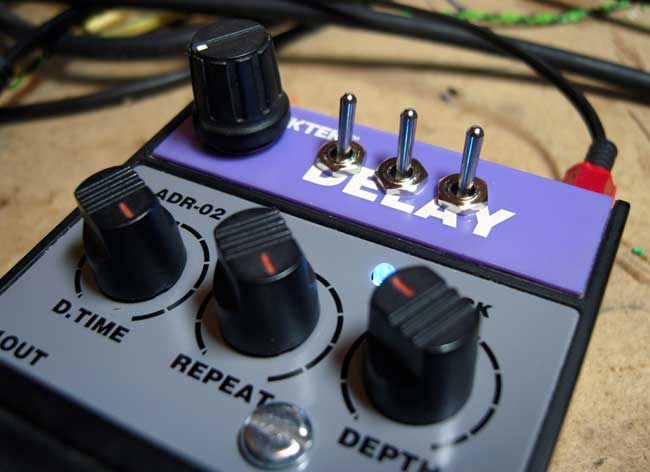 Mid crunch switch: Boosts and distort the upper mid range frequencies but also acts as a massive feedback distortion when other controls are engaged.

3 noise feedback switches: Each of these switches produces a different kind of noise feedback loop that pulses, distorts and rises in combination with the other controls. these switches enable you to create a kind of delay noise 'soundscape' without even having anything plugged into the input. The noise rise time is controlled by:

Multi-Grind knob: Controls the rise time of the noise switches, on some occasions the feedback and tone of the Splatter tone switch along with any number of other parameters depending on what else happens to be going on at the time

2 Body Contacts: These are the two bolts. They control the delay time depending on how much skin you have in contact with the bolt and which bolt you are touching. If you touch both bolts at the same time the delay time gets shorter very quickly. They can also change the pitch of feedback tones:

For mp3 demos of the kind of effects this pedal can create click on the demo's below. The first is a Yamaha RX-17 drum machine running through the pedal, the second is sounds self generated by the pedal with nothing plugged into the input.