Ahhh, the good old Alesis SR16, probably the most soul destroyingly tedious and yet inexplicably the most popular drum machine ever made. First made in 1990 and strangely still manufactured the same 30 years later, these 233 assorted percussion sounds have bored just about every musician on the planet at some time in his or her lifetime. If you want more basic information on this machine we can only suggest you do a search on Google, as if we think about it any more theres every possibility we may come down with a terminal case of narcolepsy and be forced to go and lie down.

But WAIT........ before you slip into a coma due to the mind numbing inevitability of it all, we have come to the rescue with our SR16 drum destruction patchbay mods! These mods take this otherwise inspiration sapping machine (have you got the point yet?) and mutate it into a powerhouse of offensive percussive grinding, terrifying digital noise and (insert over the top electronic noise based metaphor here!) 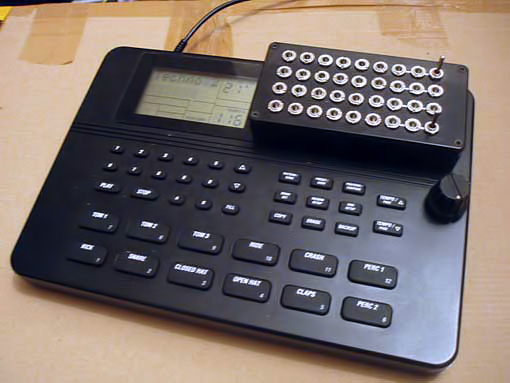 The mods consist of a patchbay mounted on the top of the machine in an extra case and a new volume knob. In order to mount the patchbay the big volume knob that used to be there has had to be removed and replaced with a smaller knob that can be seen below and to the right of the patchbay.

The patchbay consists of a 24 way percussion grinding area, 2 patchable switches and 2 three way patching multiples. Connections made between the main patchbay sockets using standard minijack cables cause some or all of the onboard sounds to transform and mutate in all kinds of bizarre and unlikely ways creating anything from walls of crushing digital noise to delicate shimmers of percussive soundscapes. Each socket provides a different effect and multiple connections can be made at any time.

2X3 way patching multiples: Two sets of three sockets which are connected together internally. Basically each multiple allows you to connect one patchbay source to two destinations on the main patchbay further multiplying the sounds available.

2X Patchable Switches: these are two switches connected to two sockets each. They can be patched in line with any main patchbay connection to allow you to turn an effect on or off at the flick of a switch instead of having to repatch any cables.

There are two slight drawbacks to this machine. Firstly due to the rather poor layout of the original circuitboard some patchbay connections do cause the overall noise floor to be somewhat higher than it would normally be. Its usually not anything you'd notice but very small amounts of digital noise can be heard on occasions. The other drawback is that some combinations of patchbay connection will cause the machine to crash and restart. Usually this only ever happens when you have more than 4 cables in the patchbay at once and happens more rarely when using the patching multiples. On the other hand neither of these drawbacks really matter much when you consider what we started with and what we've ended up with.

Click on the demo's below to hear mp3's of the kind of sounds this thing can now produce.

This is another version made from a SR16 that has the newer PCB using all surface mount components, rather than the full size components of the older through hole PCB. The surface mount boards are a LOT more stable and produce a lot less stray RF noise. We think the original SMD versions were introduced around 2004, so if you are looking for a more stable machine to bend, keep that date in mind. The only problem being that after this initial SMD version Alesis upgraded the board again to a more modern SMD design and this version is totally unmoddable. We think this happened around 2011, so theres a window of aound 7 years when the best ones were made. Unfortunately other than the date on the back and these vague guidelines its a bit difficult to know what version you're getting. 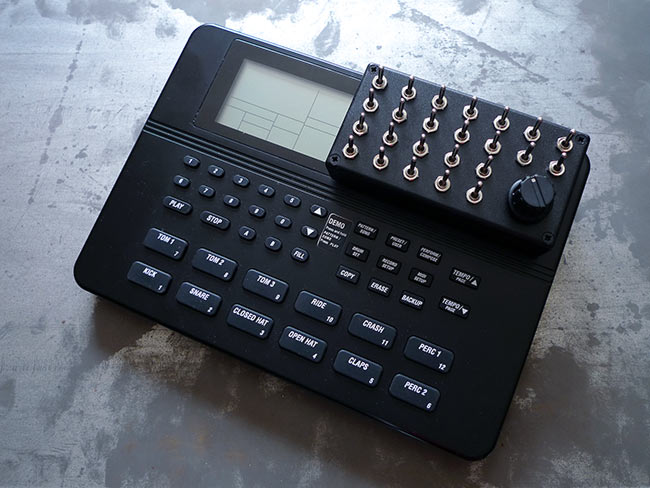 As you can see, this version has a 24 way bend bus switching matrix and a LTC1799 pitch control. The pitch control isn't as wide ranging as you might like, and it does cause a certain amount of crackle when you turn it, but once left in a position the pitch is stable without any interference.