The 1204 was released in 1996, a year after the 1202, and a year before the 1201. In many ways it is exactly what that release schedule would suggest i.e. an upgraded 1202, with a small taste of some of the stranger effects that would be found on the 1201.
Like the 1202, the 1204 has various single effects, and a selection of dual settings, with 16 different variations of each effect. It also has a pair of parameter edit knobs and a pair of EQ knobs. As well as the standard reverbs, delays and modulation effects, the 1204 includes a SFX bank featuring a Vocoder (albeit a somewhat unintelligible one), vocal distortion, rotary speaker, and for some reason a selection of noise reduction settings.
On paper the 1204 should have been a massive hit as it had the huge bonus of being programmable rather than just being a preset machine, and the two effect edit knobs, the EQ knobs, and the mix control are all controllable via midi. The addition of a dedicated mic input on the front and PRAISE THE LORD!! a power button, was just icing on the cake.

For some reason it seems that the 1204 didn't really capture peoples imagination like the 1201 did. If you wanted a decent budget reverb in the mid 90's, you probably bought a cheap Lexicon, or even the cheaper Zoom 1202. If you wanted some stranger budget multi effects you bought a 1201.
It seems that people didn't really know what to do with the midi control, and we'd be willing to bet that most of Zoom's multi FX customer base were only really interested in quick and easy preset machines, rather than programmability. While you do still see a lot of 1204's around, they don't seem to be viewed with quite the nostalgia and fondness that people still have for the 1201. 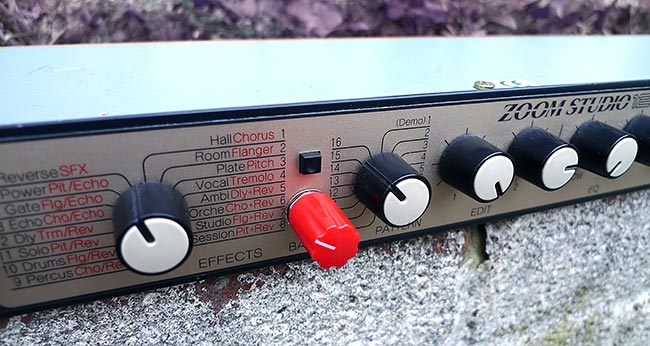 We only have one mod on the 1204, and thats the red reclocking knob to the right of the effect selection knob.
The reclocking knob sets the system clock speed of the RAM and the analogue to digital converters. This means it will extend the reverb and delay times to a degree way outside of what would normally be possible. Reverbs can be altered from short metallic ambiances to massive washes of granular glacial sound just by turning the knob. Delay times and pitch shifting effects are now infinitely variable over a massive range, and even the panning effect can be the source of some wild clock based pitching. Any effect that ever samples the input signal into the RAM in order to process it, can be reclocked.
As the reclocking knob also controls the clock rate of the converters, it also changes the sample rate of the incoming audio. At higher than normal clock settings the audio quality is actually better than the stock machine!

Check out the demo below to hear what kind of effects are possible. The vocal comes courtesy of a 1960's anti pornography educational film!

If you want your ZOOM 1204 modded get in touch using the CONTACT form.