The MAM MB33 Retro is the latest version of the MB33 / FAT FREEBASS rackmount TB303 clone. In terms of the actual synthesis circuits its more or less the same as the rackmount version, although it doesn't use the same rare TB303 transistors in the filter as both the rack versions and the x0xb0x does.
The major difference is that fact that the PCB is now a multilayer surface mount board. Multilayer boards not only have connector tracks on the top and bottom of the board, but also on extra invisible layers sandwiched in the middle of the board. This means that it can be a lot smaller and it fits in a tiny desktop case, but it also means that actually tracing the circuit and modding the thing is a nightmare! 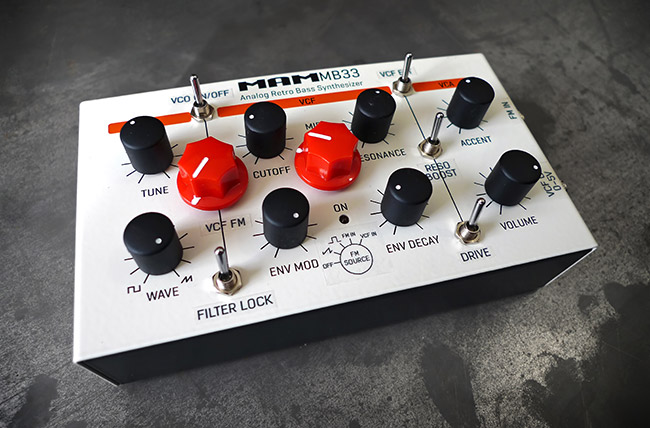 Theres really not much space in there, but we've managed to install most of the Acid FM mods we also offer for the rack version in its many forms.

VCO On/Off Switch: Normally when you plug a jack into the external VCF input, the MB33's VCO is automatically removed from the mix. As there may be occasions where you don't want this to happen, or situations such as when you're using the filter lock mod (see below) when you want to be able to turn the VCO on and off yourself, we've added a switch to add manual control of this.

VCO Drive: The MB33 retro seems to be designed to slightly distort the output stage at full volume, much like the TB303 did. The Drive mod boosts this distortion savagely for some grungy acid techno sounds. This mod is far more effective on the MB33 retro, than on the normal rackmount MB33.
This mod increases the maximum amount of distortion at maximum volume. The intensity of the distortion can be set using the normal volume knob.

VCF FM: Essentially VCF FM (Frequency Modulation) allows you to modulate the filter cutoff at audio frequencies to create all kinds of clanging cross modulation and bizarre alien splatters & sweeps. This effect works best with the resonance cranked up into self oscillation which is where the resonance boost mod comes into play.
The FM controls allow you to select one of four sources for the FM signal. The first is the normal VCF input socket round the back. This means you can run a sound through the filter section, but also use that sound to modulate the filter cutoff at audio frequencies at the same time.
The second source is a new FM input jack on the right hand side of the case. Using this source allows you to run a sound through the filter from the VCF input or just use the internal VCO, and at the same time modulate the filter cutoff with an entirely independent sound source at the FM in jack. The actual audio from the FM in jack is not heard.
The remaining two sources are the sawtooth and square wave signal from the main oscillator. These can be selected as sources completely independently of the setting on the VCO waveform knob
The FM source select knob also has an 'off' setting.

The amount of FM applied to the VCF is controlled using the VCF FM knob. We should probably point out that at maximum FM settings the cutoff and envelope controls will have very little effect, as the filter cutoff is already rapidly changing from its maximum to its minimum values at audio frequencies supplied by the FM waveform. If you want other factors to also control the VCF cutoff, it is advisable to set the VCF FM control to about 12'o'clock and adjust for best response from there.

VCF CV input: One of the major drawbacks of these machines is the lack of any MIDI knob control. While we can't add straight MIDI control this mods adds 3.5mm jack on the right side of the machine that will accept an external CV to control the filter cutoff. The CV input should range from 0-5v. Higher voltages, or negative voltages are NOT recommended.
This mod also adds a switch on the front to toggle between internal and external cutoff control. 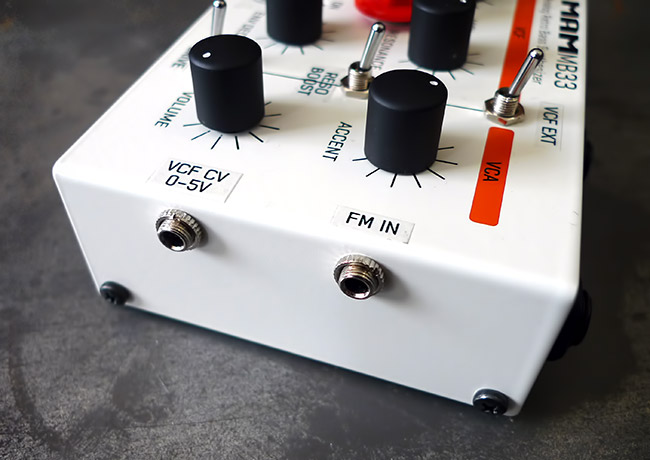 Filter Lock: Another annoying feature of these units is that if you want to use the VCF input to filter external audio signals you have to trigger the filter and VCA envelope using a midi note message, the filter then closes until it receives another midi trigger. This also means that by default the external signal will have the VCA and VCF envelope applied to it, so regardless of what kind of sound the external signal actually is, it will have a TB303 filter and amp envelope. While this can be useful on some occasions, most of the time its just annoying so what this mod does is add a switch that locks the filter and VCA open at a constant level without having to use any midi input. The filter can then be adjusted in realtime using the cutoff and resonance knobs.
Obviously if the VCO is turned on, you will hear a constant tone as soon as you activate the filter lock. You can turn the VCO off using the VCO on/off switch, but you should try playing some notes with the VCO and filter lock on, as it can generate some interesting organic sequences, especially when using the accent feature.

If you want your MB33 Retro modded get in touch using the CONTACT form.