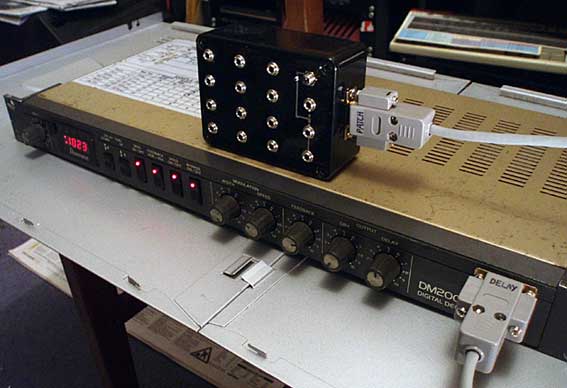 The Ibanez DM2000 is a very well featured rackmount delay dating from when Ibanez had a habit of getting manufacturers of high quality kit to build effects for them and them rebadging it with the name Ibanez. This ridiculously over engineered delay rack is in fact made by Maxon (One time producers of top end guitar FX) and has more features than you can shake a dub echo at. The basic machine has a maximum of 1023 milliseconds of delay time, delay modulation with speed and depth knobs, a delay hold button, an effects loop round the back so you can patch in effects to only effect the delay sound, feedback invert button, dry / mix / inv mix outputs with knobs fro dry and wet level, footswitch sockets for hold / modulation / bypass and arather nice old skool (and yes that is with a K) time display.

As ever we have added some mods to this machine that turn it into a unique audio grinding tool. In this case there is no way to actually mount extra controls on the casing due to a lack of room so we have mounted the mods on an external box which is connected to the main unit via a 15 way cable

The external mod box contains a 12 way patchbay, and a patching multiple / patchable switch. Connections are made between the patchbay sockets using standard minjack cables. These connections cause the delay sounds produced by the unit to chop, grind, distort and modulate in all kinds of unlikely ways. Each connection will have a different effect and multiple connections can be made at any time. The patchbay effects work in realtime on the delay sounds so you can either effect the echos or with a very short delay time and the dry signal turned to zero, you can effectively grind up the input sound in realtime. Excellent loops can also be created by using the delay 'Hold' function and then processing the resulting loop with the patchbay

The remaining sockets consist of three sockets and a switch. Two of the sockets are permanently wired together and the third is connected and disconnected from this junction using the switch. Essentuially this allows to to either use all three sockets connected as a kind of patching multiple as you find on modular synths, or patch the switch inline with two patchbay connections to use the sockets as a on/off switch for an effect to avoid repatching. 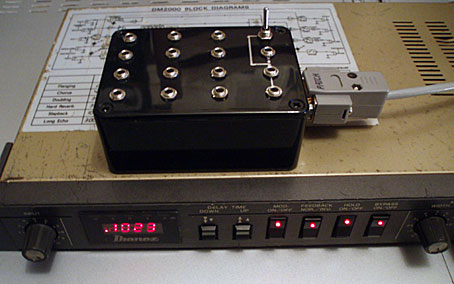 To hear some mp3 demos of the new sounds this machine can create click on the buttons below. The first two demos are sounds processed through the delay with the second demonstrating a breakbeat chopped up by the mods. The third demo shows off the feedback boost and the last demo is created just from internal feedback sound with no external input.

This is a new version of the same mods. As you can see, on this one we have housed the mods in a new 1U rack case connected to the main unit via a D-sub cable round the back. 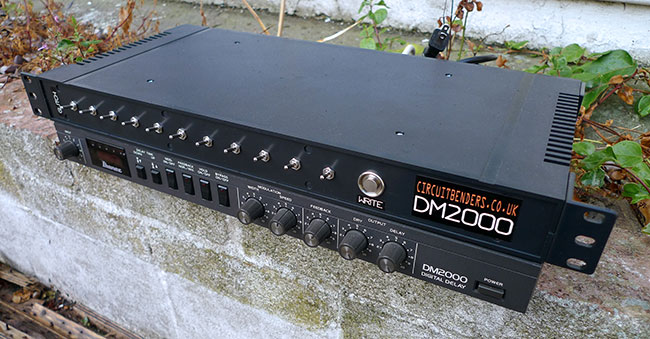 This version features an 11 way Bend Bus switching matrix to create the same kind of delay glitching effects found on the patchbay version higher up this page..

Normally effects are only applied while the switches are activated, so if you use the 'hold' function to set up an endless loop you can apply effects to the loop and then remove them by deactivating the switches. This version of the mods also features a 'write' button that permanently writes various chopping effects to any held delay loop when you press it, depending on what switches are also activated at the time. The effects are only applied to the loop for as long as you hold the button. This allows for the creation of various different timed effects within any loop. 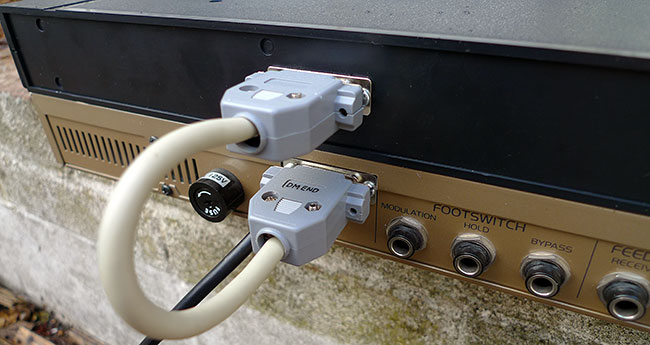 Listen to the new demo below for some new delay grinding action from this unit: