Now this device is just plain evil and in all liklihood should be banned under the Geneva Convention but they haven't caught up with us yet so we're hoping to keep one step ahead. This started out life as a cheap phaser pedal made by those giants of the guitar pedal world, Rocktek. Before going under the soldering iron it was a fairly average piece of kit with controls for resonance, depth and rate. After being circuitbent this is one of the most savage effects we have ever come across capable of sounds that will tear your head clean off its hinges. 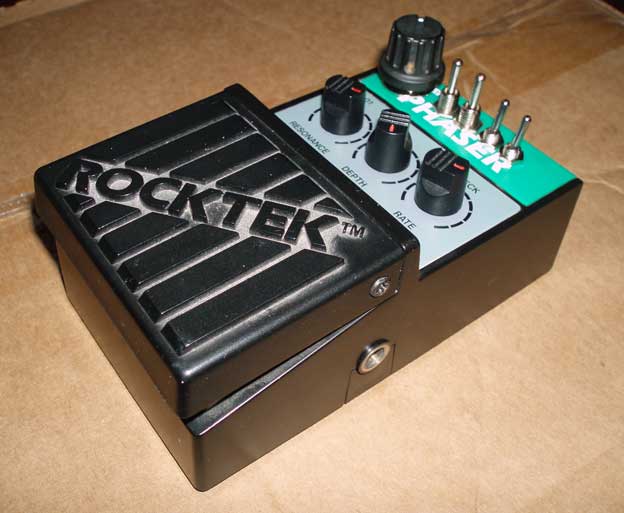 We have added 5 more controls in the space normally occupied by the battery. As a result you can now only run this thing from a 9 volt adapter but seeing as it now eats power that is probably a good thing,

The first mod is a dial That appears to control the middle point frequency of the phasing but also flattens out the sweep at either end of its travel acting like a manual phasing control.

The next control is a three way switch that set's the phaser LFO to triangle (normal), square or something approaching a nasty inverse sawtooth.

The next controls are where things get nasty and we lose the ability to describe that they actually do. There are two on / off switches and a three way switch that would appear to just brutally assault your sound, theres no other way to describe it. Each setting causes different types of distortion and sonic destruction until the unit is threatening to go into meltdown. Distorted drumbeats, static pulses, ghostly fuzz guitars, screaming sweeps and sounds like satan vomiting in a concrete mixer are all created with ease with this device. Any or all of the switches can be activated at one destroying the sound even more. What the switches actually do also seems to depend a lot on what is fed into the unit and at what volume.

Just listen to the demos, we give up :)

Click on the demo's below to hear mp3's of the kind of sounds this thing can now produce.