The Roland R5 was a late 80's / early 90's drum machine that was an extremely capable unit, and somewhat ahead of its time, but was overshadowed by its big brother the mighty Roland R8. As a result it was often neglected as a poor mans R8 and was probably never really as popular as it should have been.
The standard machine has 68 sounds, four individual outputs plus a stereo pair, extensive sound shaping capabilities,16 velocity sensitive pads and a whole host of 'human feel' and groove editing capabilities. One additional feature that takes the R5 into whole new realms of percussion programming is the ability to record parameter changes into patterns in on the fly using the data entry slider. This may not seem like much these days, but other than the R8 and the Yamaha RY30, it was a feature that was pretty much unique at the time. 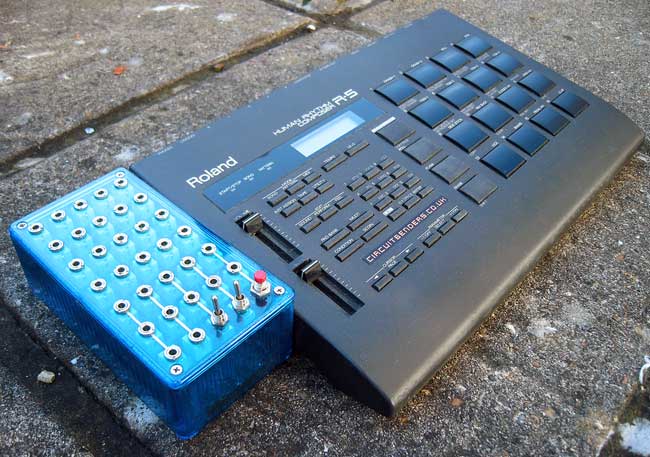 Theres no room for any decent mods inside the casing of the R5, so as you can see we've bolted an extra case to the side of the unit and mounted a patchbay in it. It would also be entirely possible to connect an external case to the main unit via a 25 way connector and cable, or even use a bank of switches instead of the patchbay. 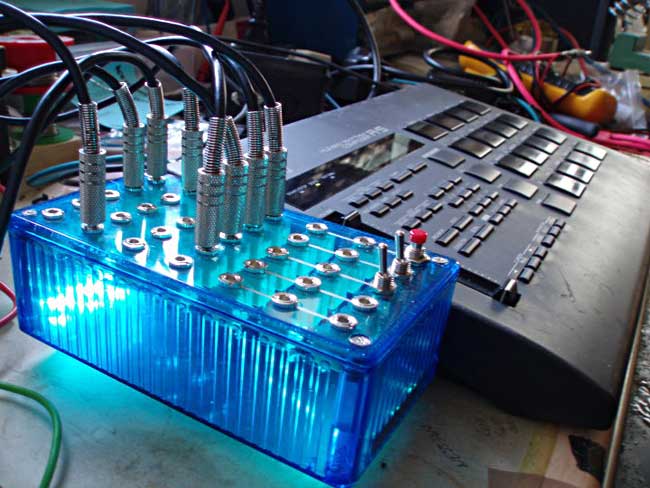 The case is made from transparent blue plastic and contains several LED's that light up when you power up the machine. This gives you a very cool and unique glowing blue patchbay. 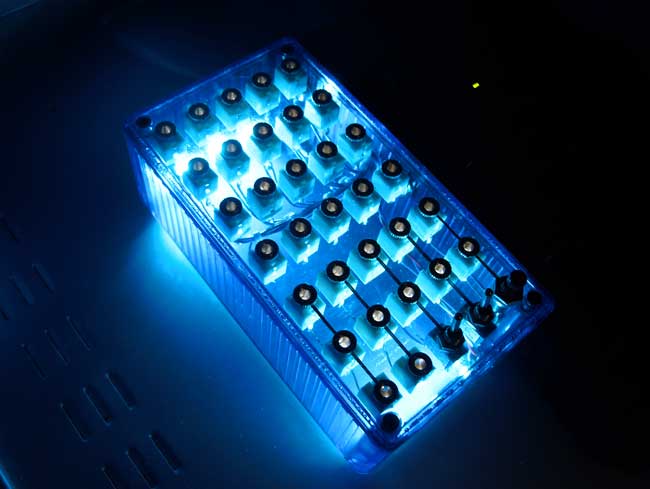 The modded R5 is very keen on brutally savage, but also sometimes strangely beautiful distortion sounds. It also excels at strange digital gurgling and shuddering sequenced effects on the longer sounds such as the cymbals and some snares. The R5 takes a little more work than most circuit bent drum machines as many of the possible patchbay connections will produce variations on distortions rather than the common effects found on similar machines, but with the R5 you find that the patching combinations do produce some interesting and more complex sounds. With most circuit bent drum machines it is easiest to produce a drum loop and then process it with the patchbay, but on the R5 it pays to take the time to produce the bent effects first, and then create a pattern specifically around those sounds.

One of the most common issues with Roland R5's and R8's is a missing power supply. In their infinite wisdom Roland chose to use an external PSU that not only supplies +10v / 0v / -10v, but also uses a 3 pin power plug that was only ever seen on these drum machines and was never used again on anything else. Far be it from us to suggest that this was a cunning plan on Roland's part to make it impossible to get a replacement PSU without spending £50 or so to buy one from them, but theres no reason whatsoever to specify +/-10v when it will run just as well on +/-12v and probably even +/-9v.

As the PSU was missing from this machine, and theres no way we're going to give into this kind of daylight robbery, we've just built a new external PSU at a fraction of the cost and connected it to the R5 using a 3 pin cable and a new socket mounted on the side.

Listen to the demos below to hear what this machine can do.