The Roland TR-505, a classic piece of kit! This Drum Machine is an essential feature of many studios throughout the whole world. Wherever there is a studio door that needs to be wedged open the 505 finds its true purpose as a door stop and does the job with a simple elegance which we can all admire. Never has a piece of music kit been so vastly overrated.
But wait, no longer will the 505 be viewed as the runt of the Roland TR range! Our Drum Destruction patchbay mod turns this otherwise average piece of kit into an industrial grade percussion monster. 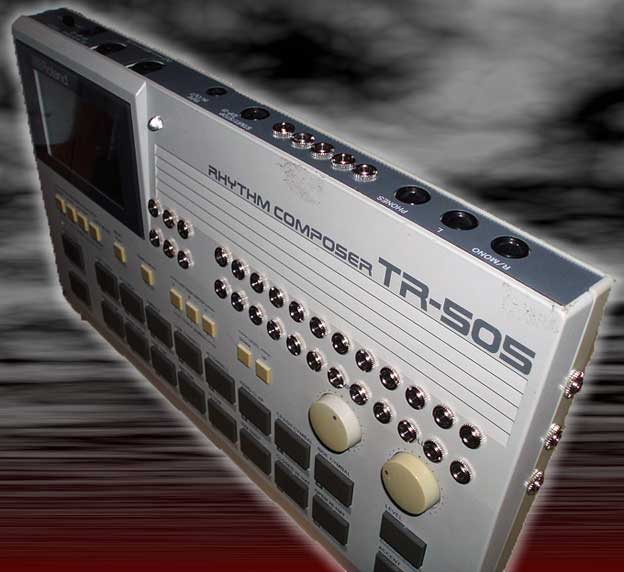 24 way main patchbay: More information and details of our patchbay mods can be found HERE. 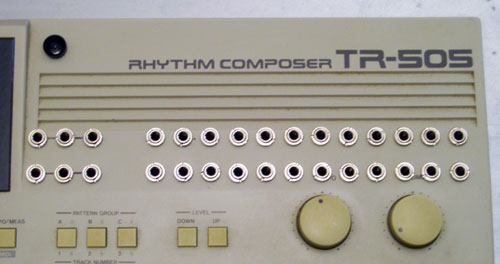 Envelope Follower LED: This blue LED flashes along with the audio output of the machine.

Click on the demo's below for mp3's of what these mods can do.

This mod adds eight individual audio outputs to the TR505. The TR505 has 8 audio channels consisting of: 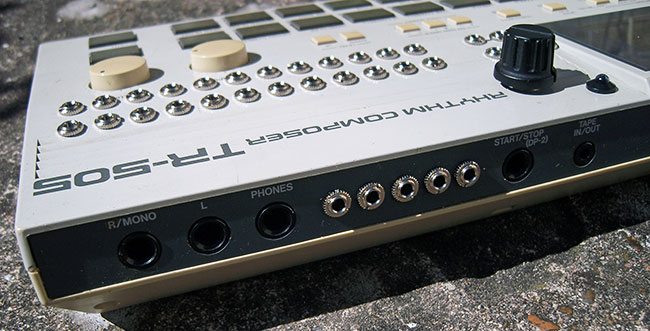 The audio at the individual outputs consists of the raw sample of each sound. Longer sounds such as the crash and hats consist of a compressed sample, with a primitive envelope applied to it so it sounds vaguely realistic. As the outputs have to be sourced in the circuit before the envelope is applied, some sounds will not be identical to the main mix outputs. This is not a problem with short sounds such as the kick and snare etc, as the raw samples are more or less what you hear at the main mix output, but you will notice a difference with the crash and hats. The individual outputs are mainly designed for isolating circuitbent sounds rather than a proper dedicated mixing tool.

We will only install the individual outputs if we are installing the patchbay and/or the pitch mods at the same time.

Listen to the demo below for an example of the effects available using the pitch knob:

We have a simple DIY tutorial on installing a pitch control into a TR505 using a LTC1799 oscillator. Take a look HERE for more details.

MODIFICATION DEAL: Get all three mods at the same time and it costs £160. A saving of £10 on the normal price.

if you want your TR505 modded get in touch using the CONTACT form.