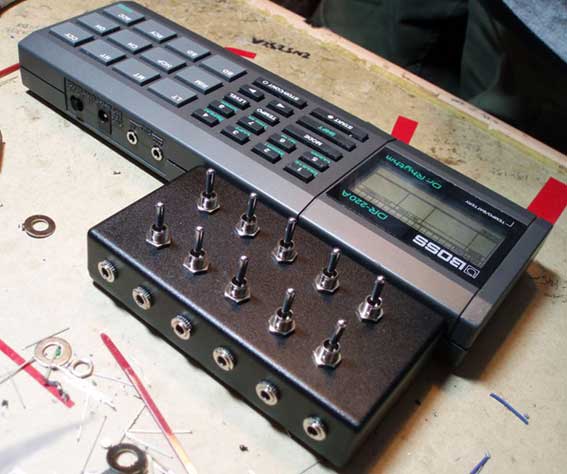 This is another somewhat odd addition to the Roland / Boss range as we can't really see what the gap in the market was that it was designed to fill, but it was probably designed as a quick and easy machine for backing tracks on demos or for the 'home organ cruise ship entertainer' scene. The A in the name stands for acoustic. There was a whole different drum machine called the DR220E that was exactly the same unit but had a different sound ROM, with a load of supposedly electronic sounds of the era.

Having taken a look at the circuitry inside, what you are essentially getting with a DR220A is a stripped down Roland TR505 and as such it sounds very similar when circuitbent. In fact this version sounds very similar to the TR505 in its normal state, although for some reason the sounds on the DR220A seem to sound a lot harder and more punchy in some unknown manner. The DR220A has 11 onboard sounds plus an accent, and despite what some sources on the net will tell you, it does let you programme your own patterns although the actual programming method can prove a little infuriating until you get your head around it. Theres no midi but you will find trigger in and out sockets round the back.

Our mods on this unit consist of a 20 way 'Bend Bus' switching matrix housed in a box bolted to the back of the unit (theres barely room inside the unit for all the wiring let alone any switches mounted in the casing itself), and six individual outputs. For more information on how our Bend Bus switching matrix works take a look HERE. The outputs work as sound 'groups' i.e. all the toms are assigned to one output and both the hats to another etc etc.

The only minor drawback to this machine is its annoying habit of making high pitched whining noises when you make several connections or combinations of connections. This is not always a problem and can often sound quite good, as you can hear from the demos, but it takes a bit of practice to use the effect well.