This is a DIY kit for our Behringulizer 2000 mod. You can find full details on the page in the mod archive section HERE, but essentially the mod adds a switchable Virtualizer and Modulizer operating system to any Behringer Virtualizer DSP1000P/DSP1024P or Modulizer DSP1200P/DSP1224P, so you can use both sets of effects in the single unit. You also get a system reclocking knob that changes the processing speed of the effects over a very wide range.

The kit consists of the Behringulizer 2000 PCB with a pre-installed custom dual operating system EPROM and reclocking circuit, an OS switch, a C100K reclocking pot, a knob, and some stickers to label the mods on the front panel. You will have to supply your own wire and there is a small amount of soldering involved, but installation is an easy job and should be suitable for anyone with a little soldering experience 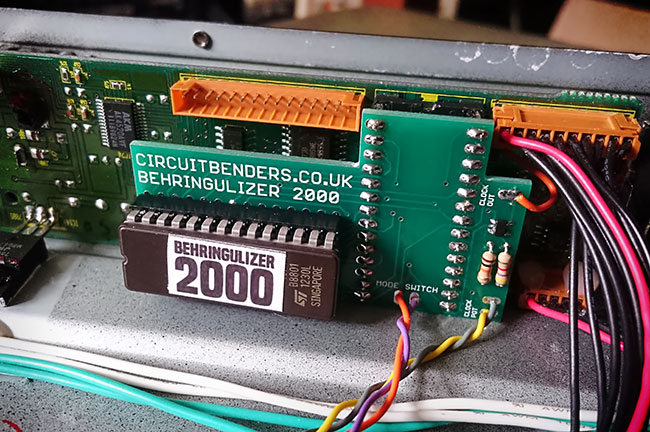 If you want to check out the full list of effects and parameters available on both operating systems, you can download the Virtualizer 1000P manual from HERE, and the Modulizer 1200P manual from HERE. The effects list is the same on the 24 bit versions. 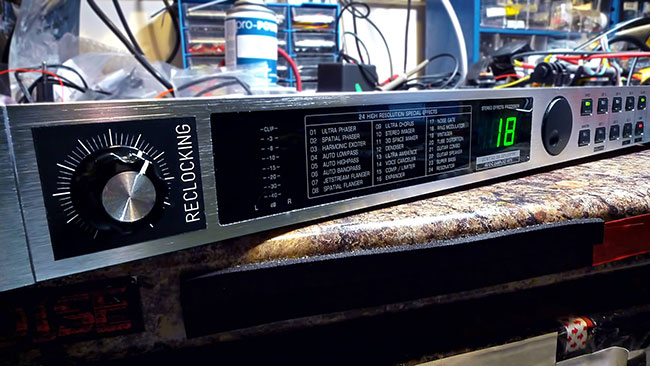 Check out some demos below, including a somewhat disturbing one of the Behringuliuzer 2000 processing a 1980's Irish Catholic guide to sex.

Full details of this mod can be found in the archive section HERE.

There are two versions of this kit available. One is for the DSP1000P / DSP1200P, and the other is for the DSP1024P / DSP1224P.
Please make sure you order the correct version for your machine.

If you want to buy a kit click on the Buy Now button below. Payments are processed via Paypal, but you can pay using a credit or debit card without having a Paypal account. If you want to pay using some other method, please get in touch via the CONTACT page.

Since the Behringulizer 2000 kit first went on sale we've had a few enquiries from people who just want the extra effects of the other unit to the one they have, and aren't interested in the reclocking knob. As a result we now have a kit available with just the operating system switcher board, a pre wired front panel switch, and the VR/MR sticker. You don't need to do any soldering to install this version.

All you need to do is pull out the old operating system ROM and plug the Behringulizer board into the empty socket as per the normal installion guide. You don't need to remove the timing crystal.
Then just mount the switch on the front panel and plug its attached cable into the pre soldered 2 pin header labelled MODE SWITCH on the Behringulizer board.

You should now have a switchable Virtualizer / Modulizer machine. Its that simple!

To buy a no solder Behringulizer 2000 kit WITHOUT the reclocking option, click the BUY NOW button below.